The best part about both Cheer seasons is that Cheer is a very inclusive sport. All different levels of athletes are welcome and can be a vital part of a team. From a brand new athlete with no experience to a life long cheerleader with full tumbling abilities!

Sideline cheer is in the fall. Tryouts are towards the end of the previous school year. Sideline cheer welcomes both male and female athletes. Sideline season is a blast in that it is relaxed. We have summer camp, the Fourth of July parade, the homecoming parade and assembly, Friday nights under the lights and so much more. Sideline cheer focuses on creativity with stunting, growing as an athlete, and cheering on our fighting scots football team with a front-row every game!

Competitive cheer season starts in early November.  This is where we get to go for gold! Competitive cheer consists of three rounds. Each round focuses on different aspects of cheerleading. Round one is the open round, with fun motions and formations.

With three separate rounds, competitive cheer is great for being able to utilize all different types of athletes.

Please feel free to reach out anytime if you have any questions!

Cross Country is a fall sport at CHS that involves running!

My name is Ben Howell and I have had the privilege of being the girls cross country coach over the past 14 years.  I think the skills developed in our sport extend far beyond our season.  Our team has always been competitive at the state level, and this is due to the team atmosphere that we continually work at improving.  Girls that are a part of our team soon learn our driving principles contained within "EAT".  The "E" is for effort.  We keep track of times and miles, but ultimately a runner's effort is far more valuable than any distance or time they may run.  The "A" stands for attitude.  We strive for and challenge everyone on the team to have a positive attitude everyday.  This becomes contagious and drives everyone towards more success.  And finally, the "T" stands for team, and that is the most important part.  When runners realize that they are not individual runners but part of a collective whole representing their school and each other, great things happen.  When all actions are viewed through the lens of the team, the family feel inspires these young ladies to push themselves beyond what they thought possible, while also creating bonds between teammates that extend for life.  Some girls on our team love running!  Some girls on our team actually don't like running!  But they all love their teammates, love to work hard, and bring a positive attitude with them each day.  We look forward to having fun together each and every day, that is what sports are about!

As of recently, we have had a lot of success.  Since 2003 we have won 8 Conference championships, 5 Regional Championships, and have had 2 top 10 finishes the last 2 years.  In the 2020 season we finished Runner Up at the State Meet by only 30 points.  We will look to chase a 2nd State Championship in 2021!

Individually this past season we had 5 All-Conference Runners along with 1 Honorable Mention. At the MHSAA State Meet, 3 runners earned All-State honors by finishing in the top 30 places in Division 1.

As a program, we strive to build strong individuals who are leaders in their school and have the ability to set goals and give their best effort in all situations.  We also want to prepare our athletes to be successful in their future endeavors, whether that is related to running or not.  We promote a family atmosphere, where runners feel they are part of a program that is not only successful but where each runner has contributed to the success of the team.  We foster this by having team camp each year, having goal-setting sessions, and encouraging our captains to lead along with the coaches.  Finally, we work hard but have a lot of fun at team dinners, summer training, and meets hanging out together and building a winning culture that is very inclusive to everyone on the team.  Come join our team next year and add your legacy to the Caledonia Boys Cross Country team! 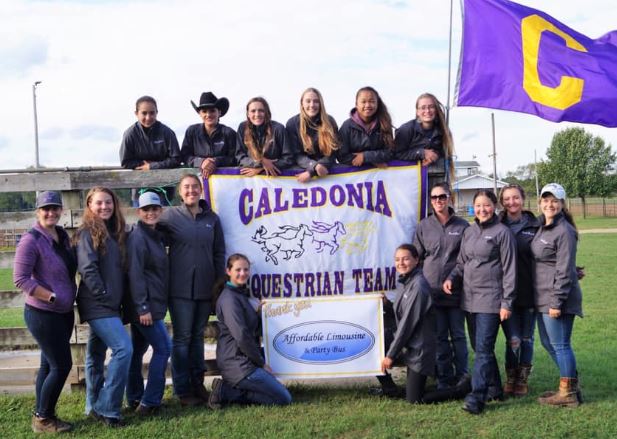 Coach Pennington comes to Caledonia with a proven track record of success. His thirteen seasons at Zeeland East represent the most winning era in the school's 110 years of football. His teams won numerous conference titles, District titles, as well as one Regional Championship and a State-Semi finalist team. Coach Pennington’s teams competed consistently very well against much larger enrollment teams. During his time with the Chix, they competed in five games against Ok Red opponents winning four of those games. Coach Pennington has spoken all over the country for the Nike Coach of the Year clinics and Glazier football clinics about the spread offense. Next year the Scot’s will begin a new era under his leadership!

My name is Carl Winterbottom, and I took over as head coach for the men's soccer program in 2018. This upcoming fall season will be my fourth year alongside stellar assistant coaches with collegiate soccer experiences. Our freshman coach, Luke Dishnow, is an alumnus of Hope College and he works with the freshman program to help them develop their skills and a basic understanding of the game. Both of our JV coaches, Henry Spees and Kody Larsen are both Davenport University alums and have done a tremendous job in advancing the technical and tactical skills of the players so that they can be best prepared for the varsity level when the opportunity arrives. The varsity assistant coach, TJ Ifaturoti, and program-wide goalkeeper coach, Sean Cox are also both alums of Davenport University. Between all three levels, all coaches share the same philosophies of hard work, unity, teamwork and having success on and off the soccer field. We want to develop great individuals with a hard-working ethic that translates to life after soccer and helps them become successful in their respective career paths.

Within the last three years, we have consistently finished in the top three of our OK- Red conference division, as well as winning the OK-Red conference championship in 2018. This past season, we finished runner-up in the District championship. We have former student-athletes that have gone on to be successful within their career and others have gone on to play at the collegiate level. Each year around August, we have about 45-60 players trying out for the soccer program and we do everything to make it as inclusive and family orientated as possible. We usually have an end of the year banquet; we host team dinners for all three teams during the season and support one another during all home and away games.

For this upcoming season, we look to be strong contenders in the conference division again, compete for another district title, go further than ever before in the program history, and make a deep run during the state playoffs. We are excited and looking forward to working with you and seeing you grow as tremendous student-athletes during your career at Caledonia. We appreciate your interest in being a member of the soccer program and adding on to the legacy.

The Caledonia Swim and Dive Team is a proud member of the OK Red Conference. We have a community of swimmers and divers from 3 different schools with a wide variety of talents.  Our team mission is to allow our athletes to grow their love and knowledge of swimming while forming team bonds that will carry them through the highs and lows of the sport.

This season we had all girls attend conferences and a freshman diver qualify for the state meet. We are eager to see where our boy's season goes and how both teams will grow together in the future. The coaching staff encourages inter-team bonding in and out of the pool. We also participate in practices and social gatherings with other high school teams to foster a safe and friendly swimming community in the Greater Grand Rapids area. Swimmers and Divers from our team have continued their careers in college on both varsity and club teams, and gone on to lead other teams as coaches. Welcome future Caledonia swimmers and divers! We're so excited to meet you! You can join our Facebook page Caledonia Aquatics for more information.

My name is Scott Bont and I have been coaching tennis at Caledonia for 21 years. I also played 4 years of Varsity tennis for Caledonia as well. I continue to play competitive tennis for one of the local tennis clubs.

Caledonia tennis is a "No Cut Sport" meaning everyone who comes out, fully participates in practices will play in the match. Caledonia tennis is known for our good sportsmanship, being a competitive team, and having overall great young men. Tennis in West Michigan is very competitive and we compete well with the various top teams in the area. Our current conference has consistently had our top 2 teams finish in the top 10-15 in the state in Division 1.

Caledonia tennis continues to grow and is always looking for players to come and learn one of the greatest lifetime sports you could play. Tennis is a sport you can play for the rest of your life, as well as learn so much about yourself at the same time.

We hope that you consider joining the tennis program for the upcoming season. There is also a Middle School program that Coach Scott Bont is involved which would also be a great place and time to give tennis a try.